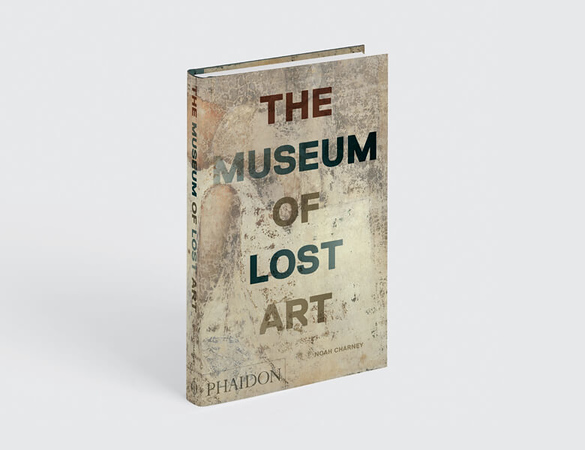 Noah's illustrated history of lost art will be published by Phaidon in 2018. A followup to his best-selling 2015 book, The Art of Forgery, The Museum of Lost Art will look at dozens of the most important paintings, sculptures and monuments that are no longer extant, but which were, in many cases, more important when they did exist than the works that, through good fortune, survive to this day. For more information on the book, check back here or follow Noah on social media.

"Charney curates a collection of masterpieces that, though destroyed, misplaced or stolen, may no longer be seen. Yet they play a crucial role in our culture."

"Charney picks out some of the greatest lost cultural artifacts in history and tells vivid tales of their bitter ends. Charney delivers..."

Excerpt from The Museum of Lost Art:

Imagine a Museum of Lost Art. It would contain more masterpieces than all the world’s museums combined. From the treasures of Rome to the library of Alexandria, from the religious art smashed in the Reformation to the masterpieces taken in the Gardner heist, from the looting of the Iraq Museum and hundreds of thousands of archaeological sites to the ancient cities and statues smashed by ISIS, from the tens of thousands of treasures seized by the Nazis to the millions of objects stolen, hidden, or destroyed throughout the modern era and never found, the Museum of Lost Art provides a cutting reminder of the fragility of the world’s treasures. Many of our greatest artworks have been lost to theft, vandalism, iconoclasm, misfortune, and willful or inadvertent destruction. Still more have disappeared, at the mercy of thieves, with but a sliver eventually recovered after dramatic investigations. It is important to study what has been lost and why. To understand how art can best be preserved in the future. To appreciate what has survived, and just how delicate is that miraculous fraction of mankind’s creative history that has endured for centuries or even millennia. To recognize that what good fortune has blessed with survival is not necessarily the art that was most important or influential when it was first displayed—and just because an object had the bad luck to have been lost or destroyed, by man or by nature, does not mean that we should forget its place in history. For most artists of the pre-Modern era (prior to the Industrial Revolution, around 1750), only a fraction of their known oeuvre is extant, its location known—for some artists, Leonardo for instance, at least one-third of the roughly 15 paintings we know of from contemporary and later sources is accounted for, at least 8 works are lost. Caravaggio painted some forty works for which we have any evidence (as with Leonardo, the number differs depending on which scholar you consult), with 8 lost. Scholars know of many other works of masters like Dürer and Phidias and Giorgione that are now lost: destroyed, stolen, or simply missing. Collected, these lost works represent a compelling negative-space portrait of the history of art. These works were as renowned in their time as their extant counterparts: had it survived, Leonardo’s Sforza Horse would be as important as the Mona Lisa; Rogier van der Weyden’s Justice of Trajan and Herkinbald was more famous during his lifetime than his iconic Deposition at the Prado; Picasso’s burned Portrait of Dora Maar would hang proudly beside his Portrait of Marie-Therese Walter; and the lost original bronze version of Laocöon would likely outshine the Roman marble copy that holds pride of place at the Vatican museum. Many lost works were more important and celebrated than those that have survived, and yet our image and study of art is skewed, for obvious reasons, towards works that can be seen, that have—largely through good luck—outlived the vicissitudes of time, the numberless dangers that can befall a work of art that is often as brittle as a skin-thin piece of paper. This book seeks to correct this prejudice in favor of the survivors and to resurrect and preserve the memory of the lost. The lost works here were chosen not only because they are high-profile, feature the lost (or nearly lost) artworks of famous masters, and make for fascinating stories, populated with bizarre characters and plot twists. The works selected offer an alternative history of art. Most art history books analyze the same two-hundred or so extant historic works over and over again. But there are lost works that, while extant, were as important and praised, if not more so, than the standard “canon.” This book will not only tell the story of how great works were lost, but also the story of the lost works themselves, what we can learn from them as historical objects, and how they enrich our understanding of the history of art...

Museum of Lost Art at DMA