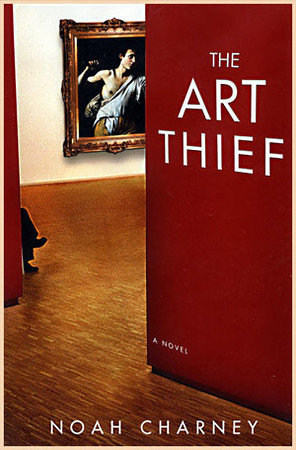 The Art Thief, Noah’s debut novel, was an international best-selling thriller that follows the theft of three paintings, and the hunt to recover them across Europe.The Art Thief is the debut novel by the art historian and writer Noah Charney, first published by Atria in 2007. The novel involves the theft of three paintings, one by Caravaggio and two by the Suprematist Russian painter Kazimir Malevich. The story follows the stolen paintings across Europe, through a web of intrigue that involves art smuggling, forgery, art historical puzzles, and double-crosses. The novel was an international best-seller.
Summary Rome: In the small Baroque church of Santa Giuliana, a magnificent Caravaggio altarpiece disappears without a trace in the middle of the night. Paris: In the basement vault of the Malevich Society, curator Genevieve Delacloche is shocked to discover the disappearance of the Society's great treasure, "White-on-White" by Suprematist painter Kasimir Malevich. London: At the National Gallery of Modern Art, the museum's newest acquisition is stolen just hours after it was purchased for 6.3 million pounds. While three separate thefts are simultaneously investigated in three separate cities, the apparently unrelated crimes have more in common than anyone imagines. In each city, the authorities enlist the help of a renowned art investigator, police inspectors, and Scotland Yard. A trail of bizarre clues and intellectual puzzles reveals forgeries, over-paintings, thefts, and double-crosses leading ever deeper into a baffling conspiracy.

Sales
As of 2009, The Art Thief was available in fourteen languages, as well as ebook and audiobook editions. It sold very well in the United States, though not quite making it onto the US best-sellers list, despite its release at the cusp of the bad market year of 2008. The Art Thief did particularly well in Europe and Canada, and was a best-seller in five countries: Spain, the Netherlands, Canada, Croatia, and Slovenia. In Spain the novel went through five printings within its first few months in print and in the Netherlands, where it was published under the title De Caravaggio Kunstgreep (Luitingh 2008), it sold out of its print run in the first week of sales. In Italy the book was called La Donna del Collezionista (Longanesi 2008). There has been interest in making The Art Thief into a film, and Charney has been asked to write a sequel.

Critical PraiseThe novel received much critical praise from peers and the media. USA Today wrote that the novel contains “Fascinating details about Caravaggio and Vermeer, the lucrative business of art forgery, and the sophisticated thieves who steal priceless paintings.” The Financial Times called it “An engaging whodunit.” The Rocky Mountain News said that the book was “Descriptively brilliant and filled with witticisms, this fine romp features a clever and well-drawn cast of characters, as well as educates readers about real masterpieces and the artists behind them.” The Richmond Times-Dispatch wrote that the novel was “Clever and addictive.… A first-class example of literate escapism.... [Charney] might do for the art world what Tom Clancy has done for the military-technology milieu.” The novel also received praise from fellow writers, including Steve Berry, Don Winslow, and Javier Sierra.

Selected Praise for The Art Thief
“Fascinating details about Caravaggio and Vermeer, the lucrative business of art forgery and the sophisticated thieves who steal priceless paintings.”
-USA Today

“Descriptively brilliant and filled with witticisms, this fine romp features a clever and well-drawn cast of characters, as well as educates readers about real masterpieces and the artists behind them.”
-Rocky Mountain News

“Clever and addictive...A first-class example of literate escapism... [Charney] might do for the art world what Tom Clancy has done for the military-espionage milieu.”
-Richmond Times-Dispatch